Alzheimer disease or Alzheimer's-type dementia is a progressive degeneration of brain tissue that primarily strikes people over age 65. It is the most common cause of dementia and is marked by a devastating mental decline. Intellectual functions such as memory, comprehension, and speech deteriorate. 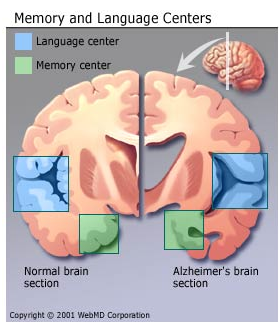 Memory impairment is an essential feature of Alzheimer’s disease and is often the first sign. Recent memory is lost first. As time goes on, attention tends to stray, simple calculations become impossible, and ordinary daily activities grow increasingly difficult, accompanied by bewilderment and frustration. These symptoms tend to worsen at night. Dramatic mood swings occur , outbursts of anger, bouts of fearfulness, and periods of deep apathy. The sufferer, increasingly disoriented, may wander off and become lost. Physical problems, such as an odd gait or a loss of coordination, gradually develop. Eventually, the patient may become physically helpless, incontinent, and unable to communicate entirely. Alzheimer's disease can run its course from onset to death in just a few years, or it may play out over a period of as long as 20 years.

Typically, people develop Alzheimer's disease as they grow older, but the disease is not a natural result of aging. It is an abnormal condition whose causes continue to be investigated. 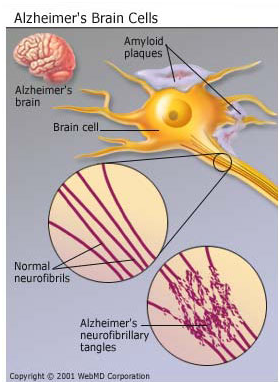 The gradual loss of brain function that characterizes Alzheimer's disease seems to be due to two main forms of nerve damage:

There is some evidence that people with high blood pressure and high cholesterol have an increased chance of developing Alzheimer's. In a minority of cases, head trauma may be a contributing factor (the more severe the head injury, the greater the risk of Alzheimer's dementia later in life).
While many of these theories are still being studied, it is clear that the biggest risk factors associated with developing Alzheimer's disease are increasing age and family history.