The series aims to raise awareness, provide information and promote the understanding of social justice, particularly within the local Lebanese social context.

After being approached to draft the Harm Reduction Article, I had the idea of a series being written which covers all manner of Social Justice Issues.

The Lebanese Forces has always made battle for a better society on all levels, be it national security or the security of vulnerable minorities.

This is a great strength which has always been on display.

The Idea of a series of articles is to promote social justice initiatives amongst young people, spreading education amongst the wider community of its importance and to keep it on the political agenda once political crisis wanes and ample opportunity arises.

The purpose is not to distract from the current and future priorities but to maintain a present awareness, whereby some progress is maintained for when the opportunity presents to develop social justice systems further, the groundwork is already established.

This greatly increases the probability of success of future developments and establishes a base from which to work on. Current resources may not allow for much commitment at the present time, but in the spirit of community development, progress can be made without heavy investment.

Already the LF Students have shown how easy it is to invest in the progress of social justice by providing the platform on their website. Some quick benefits include:

"All that is necessary for the triumph of evil is that good men do nothing."Edmund Burke

Social Justice is described as “The idea of developing a society or institution that is based on the principles of equality and solidarity, that understands and values human rights, recognizing the dignity of every human being.”

As the world becomes more of a global village, people are discovering there are more similarities than differences between the people of the world and a strong desire for equal opportunity and the protection of human rights is becoming more of a reality for more people.

This has provided great opportunity to come together and share knowledge of how different communities and populations have managed to achieve change relating to dignity, human rights, unity and equality. Establishing these social norms amongst vulnerable and marginalised populations within our communities, strengthens our societies and provides a common good for all in society to work toward, that all receive the benefits and rewards from.

The series aims to provoke dynamic thought on the subjects covered and to generate a level of interest, education, understanding and increased communication of the topics in local Lebanese society, and the vulnerable, marginalised communities within it; which like all societies, are often forgotten, overlooked, despised and ignored.

The developers and contributors to the series view modern Lebanon to be uniquely positioned in its development where the desire to achieve and establish a strong response to social justice for all Lebanese has never been higher. Lebanon has found itself with a robust population of educated youth, who are committed to developing a strong, united society of which all are free to pursue the opportunities available to them and to increase those same opportunities to vulnerable members of the community.

We hope that local stakeholders will also begin to contribute to the series and showcase the great work they have been doing, promoting open and dynamic discussion around the presenting social issues, needs and concerns, illustrating the incredibly diverse and varied support already offered by dedicated, passionate, gifted, individuals who have selflessly committed their time and resources to assist others, address issues and establish platforms for further work to be done.

All across the great nation of Lebanon exists large numbers of committed individuals, communities, Government and NGO’s who have established education and information systems, programs, services, interventions and activities which promote social justice in its various forms.

Both professionals and non-professionals have dedicated their time, skills, knowledge, resources and finance to assist those in need. By esteeming their work through the use of this series, it is hoped to like minded individuals will be interested in contributing also.

The sharing of information of what is being achieved by those committed to social justice within Lebanon, provides food for thought for many more individuals than are currently involved in social justice projects and provides an opportunity for people to consider how their lives can effect others. Educating society on what they can do to contribute to their nation and people empowers communities to take action against social injustices, with no effort being too small that it cannot impact the quality of life for another person.

If one considers the observation that the worth and dignity of a civilization is judged by the way it the treats its weakest members, we cannot help but look back in shame at our past.
Rudolf Rickes Social Justice Yesterday - Today - Tomorrow
صحة MAY 02, 2012
إستطلاع
مجلة آفاق الشباب
عدد استثنائي 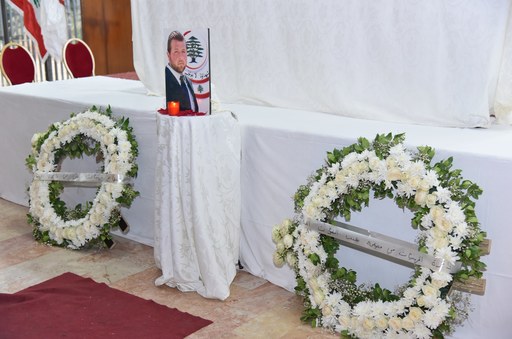