Ebola hemorrhagic fever is one of numerous Viral Hemorrhagic Fevers. It is a severe, often fatal disease in humans and nonhuman primates such as monkeys, gorillas, and chimpanzees. It is caused by infection with a virus of the family Filoviridae, genus Ebolavirus.There are five identified subspecies of Ebolavirusfour of which have caused disease in humans. The natural host of the virus remains unknown but researchers believe that bats are the most likely reservoir.
Transmission is done through: 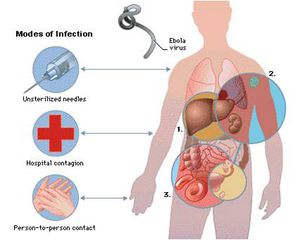 During outbreaks, the disease can spread quickly within health care settings such as clinics or hospitals.

Symptoms of Ebola HF typically include:

Symptoms may appear anywhere from 2 to 21 days after exposure to Ebolavirus though 8-10 days is most common.

Standard treatment for Ebola HF is still limited to supportive therapy. This consists of:

During outbreaks of Ebola HF, those at highest risk include health care workers and the family and friends of an infected individual.
صحة AUG 13, 2014
إستطلاع
مجلة آفاق الشباب
العدد 88 من نشرة آفاق الشباب